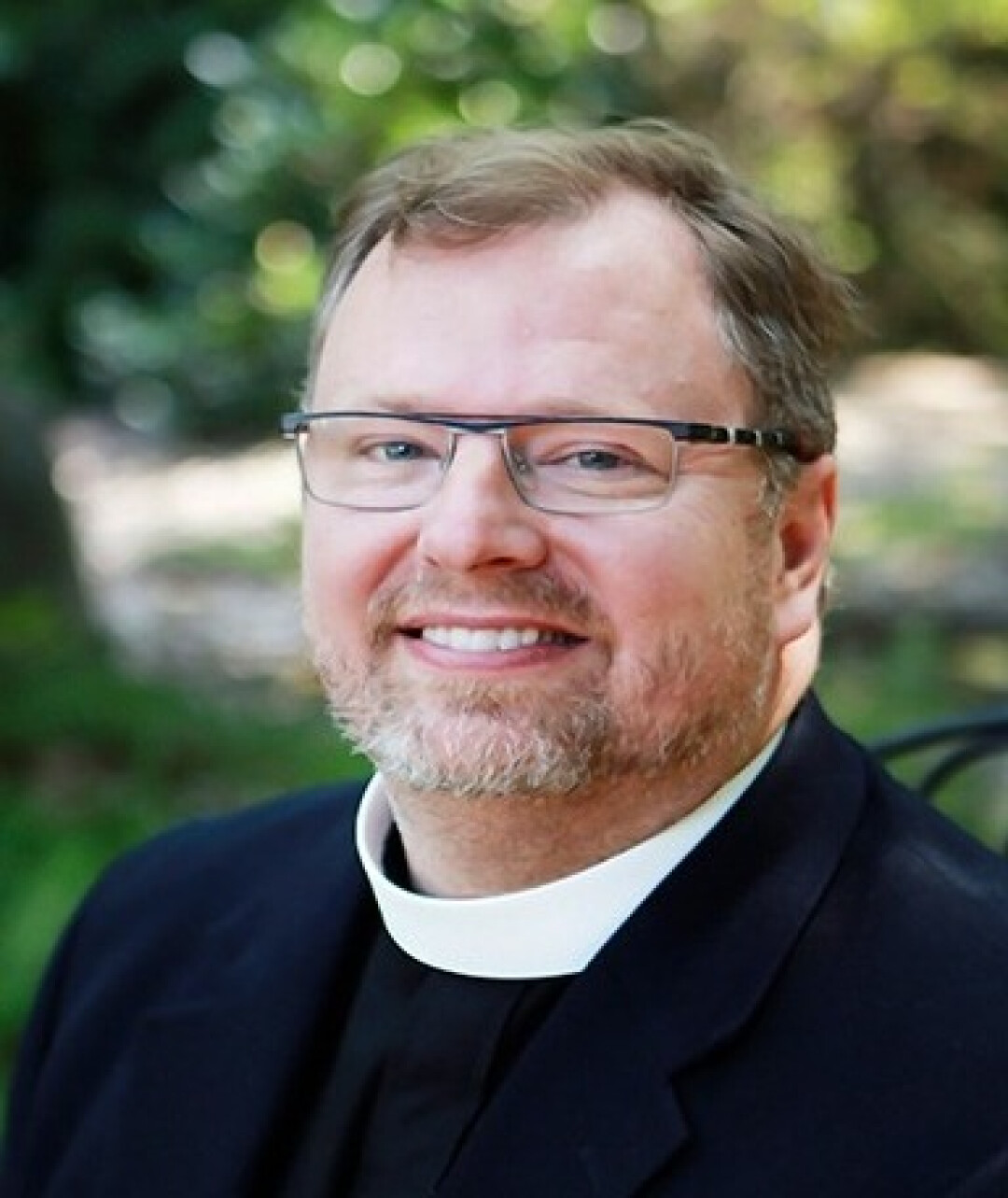 After a year-long nomination process, Rev. Canon Alan Hawkins, was elected bishop coadjutor of the Diocese of Christ Our Hope on April 29, 2021. He currently serves as Rector of Church of the Redeemer in Greensboro, North Carolina and Chief Operating Officer of the Anglican Church in North America.

With the dust settled on the election, I sat down with Rev. Alan to get his thoughts on the nomination and election process, what he is looking forward to about his new role, and the future he envisions for the Diocese of Christ Our Hope.

Diocese of Christ Our Hope (DCH): So walk us through what the whole nomination process was like. Not necessarily everything you had to do, but what were you feeling? How were you challenged by the process?

Alan Hawkins (AH): Yeah, a number of things. One, it is long because it has to be long. So there’s this sense that for a year of your life, you’re in limbo. You know, I could be, but I might not be [elected]. It’s hard to sustain that sort of thinking when you’re sitting here as the rector going, “I’ve got to make plans about this, but [I’m still waiting to hear].” It can’t be any other way, but it really makes you say your prayers a lot more and trust god!

DCH: What was the process like for you as the rector of your church? You have an entire staff and congregation you’re trying to manage and trying to prepare for a variety of outcomes.

AH: We had a retreat in August where I shared with everyone that I was in fact in the nomination process. So I gave them a heads up. It allowed me to also engage some structural stuff here [at Church of the Redeemer]. It gave me plenty of time to walk through “what-ifs” with the vestry, as well. There was certainly a benefit to that timeframe too.

DCH: How were you feeling the election evening itself?

AH: I was feeling so at peace. I just was not stressed or worried. I would have been happy with either outcome, honesty. I think I got really stressed when they took the first vote. I thought it was going to be very quick like the practice vote. That was very quick! The actual vote made me go, “Oh no! What’s going on here? Maybe there was a problem or something.” So for that one minute, that felt like thirty minutes, you know, my heart was like, “Oh my gosh, what’s happening!?”

DCH: It really didn’t take long at all, but I’m sure that felt like an eternity – for you and the folks watching with you. I know you had lots of people from your congregation at your church watching with you. What was it like once the election results were announced?

AH: Yeah! A lot of hugs, celebration, and excitement. Just felt a sense of encouragement. Texts immediately started coming. The best thing [my wife Angela Kaye and I] did was get away and shut the phones off.

DCH: Do you have any sort of trepidation around handing off a lot of your day-to-day work at Church of the Redeemer?

AH: No. I would say there’s just a gradual process. Fortunately, I’ve lived as a dual-jobbed person for so long that that’s not hard to do. We’ve been working on that since August.

DCH: So it’s been three weeks since the election. Hopefully you’ve had time to let it sink in! If so, what are you most looking forward to as bishop coadjutor?

AH: Just getting to do Episcopal ministry, ordinations and confirmations and church visits. Really, really excited about those. I’m also really excited to sort of take the next season of leadership in the life of this diocese and move us down the road in mission expansion. You know, church development, there's a lot a lot of real great opportunities for Christ, our hope that have me very excited.

DCH: What do you think that looks like – moving the diocese down the road in mission expansion?

AH: Building deaneries. So really getting deaneries to have traction - processes and strategies and all that in a way that also doesn't burn out the rectors and leaders of those deaneries. That's one area.

Every tribe and nation network is super high priority for me. I want us to begin to reflect and look like the rapidly diversifying culture that we've got. So that's another piece. And then lastly, next generation leadership.

With next gen leadership, continuing to grow Camp Booyah, continuing to grow collegiate ministries, you know, I’m fine we have a placement problem? Sure. Like, where are we going to put all these leaders? I will not be a happy camper, if we have the inverse, which is a “we can't find leaders problem.” And I think doing next gen leadership well will produce leaders see now there'll be right college ministers and youth workers and all that that come along.

DCH: If you had to name it, what is the philosophy underlying those three things? Deaneries, Every Tribe and Nation, and next gen development?

But I really do think that it's easy to lose track of the fact tat we are in the gospel expansion business. That's what got us started. And that will keep us going. And, as I said, in my Q&A, you know, church planting is one big facet of that. That's what creates opportunities for leaders, creating new congregations, growing congregations, you know, and those leaders are equipped to share the gospel to reach new people to develop new ministries. So that underlies all of those things for me.

DCH: That’s really great. Backing up just a hair. You said you’re most excited for the Episcopal Ministry. What about that is exciting to you?

AH: I think it's just a treasure that the bishop of the diocese is the one who confirms people. Even though as a Rector, it'd be far more expedient. If they allowed rectors to do it, you know. But that's that's not our perspective on church history. I think there's something really rooted and connected to the idea that this office is the one who, in the staff and the clergy’s preparation process, welcomes people into the life of the church as members and confirmed participants.

DCH: On the flip-side, what are you most wary about as you assume your new role?

AH: Probably the thing that is just going to be a little bit more difficult is I'm now a bishop over peers. And what if I have to admonish one of my peers, someone that I've worked with a long time? Or what if one of them, God forbid, has a meltdown or failure? That's probably the thing that has always made me the most cautious and trepidatious about this role.

DCH: What is your kind of greatest hope for the diocese during your tenure?

AH: So I think that my greatest hope is that we will be faithful to Christ and obey the Holy Spirit. Second thing that I'm hopeful for is that as the culture has and is changing, and will always change, but it's rapidly changing, that we will be creative and innovative in ways to be faithful, but also to be effective. And, third, I'm hopeful to see us reflect that growing diversity of people, tribes, and nations, in our diocese, everything over the longer range.

It will be great to have a synod where our worship service is a song in Spanish, a reading in Swahili, and, you know, a sermon in another language, translated, into English and other languages so that we start to look like more and more the culture, the cultural diversity around us.

DCH: Last question. What sort of final word or exhortation do you have for the people in our diocese?

AH: I would say become more involved in your deanery processes and deanery events. Ask your rectors to, you know, communicate more about deanery things. Look for ways to get to know other area churches even if they're a couple hours away. That's one.

Number two, that our laity would really clamor for resources and help for them to be effective in their vocations as well as ministry through their vocation.

And lastly that we would really have a deep heart for children. So, I've said that the way a church treats its nursery tells you a lot about the church and what they value. So we really need to have a commitment to our children, our nursery, our youth ministries, as the engines of mission expansion as well.

You can find further information about Alan+ and the bishop coadjutor process here.

Officially he's Robert, but you can call him Buddy. Everyone else does!
As Communications Director, Buddy helps the diocese cast vision and stay on mission in all of its work. He sets communication guidelines and best practices, manages diocesan events, crafts content, edits the AnchorLines newsletter and Weekly Cycle of Prayer, administrates adhope.org, supports the diocese’s ministry initiatives, and makes sure the rest of the staff dots their "i’s" and crosses their "t’s."
He especially loves sharing stories of God at work in the diocese. Churches are being planted, ministries are being founded, and people are coming to know and love the Lord Jesus Christ. As communications director, Buddy gets a front-row seat to the Lord is doing!
Buddy is married to Sarah, a registered nurse in the neuro-ICU. They live in Greensboro, NC where they are raising two wonderful children, Lydia and James. They have attended Church of the Redeemer since 2016, where Buddy serves as a deacon. He will graduate with his Master’s Degree from Asbury Theological Seminary in December 2022.
When he’s not working you, can find Buddy playing with his kids, reading spy novels, and watching ice hockey. If you come by office, there’s a good chance you’ll hear heavy metal music coming from his door.
(Login/Register to leave a comment)